Noah’s nursery is making some slow but steady progress. I managed to give the ole white Ikea curtains a face-lift by sewing broad navy blue stripes on them. These Ikea curtains have been moving around a bit. I have two sets: one has always been in the gray guest bedroom (which is now in the process of becoming the nursery) and the other set that used to be in the dining room has been moved to the second taupe guest bedroom. 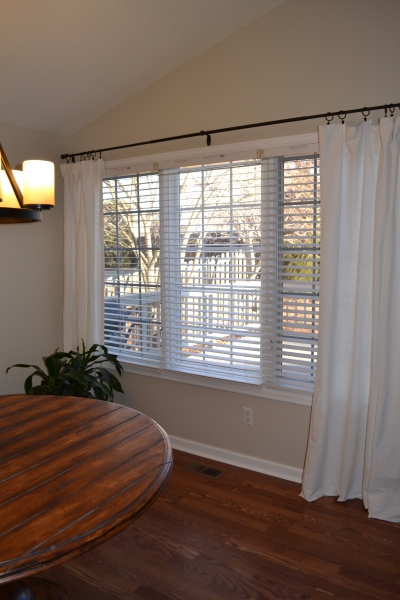 After shopping around for nursery curtains, there wasn’t anything out there that really appealed to me, so I decided to make them myself. Then began the hunt for fabric. I couldn’t find any patterns that I liked for a reasonable price. JoAnn’s had some cute fabric in the interior design section that ran about $50 a yard ($35 after the 40% discount coupon). Since I needed 5 yards, this came out to more than I was willing to spend.

It was much cheaper to transform the curtains I already had. I toyed with the idea of doing a moroccan stencil pattern with fabric paint, but the stencils ran about $40. Instead I opted to go with navy blue stripes. All I had to buy was the navy blue fabric (about $3 a yard and I bought 3.25 yards) for just over $10.

I cut the fabric length in half, which left me with strips about 7-8 inches wider than the curtain width. I wanted the stripes to be about 12 inches wide, so I cut 14.5 inch sections out of the fabric (because it was about 44 inches wide, so I just cut it into thirds). Then I ironed the edges (fold, iron, fold iron…for each edge) and pinned them on curtains, leaving 12 inches from top and bottom edge as well as 12 inches between the fabric stripes. After sewing the stripes on, I was left with the excess fabric hanging over each side. I trimmed the extra fabric so it only stuck out a few inches on each side, folded the fabric under, then pinned ironed it to the back side of the curtain. It was labor intensive – several hours of measuring, cutting, ironing, pinning, and sewing. I had a lot of second thoughts about my DIY stripes throughout the process, especially when the sewing machine acted up on me a few times. Poor Blake tried to stay out of my way as I became an increasingly grumpy pregnant woman on a mission. Finally, after working on them most of the day, I completed them around 11pm. 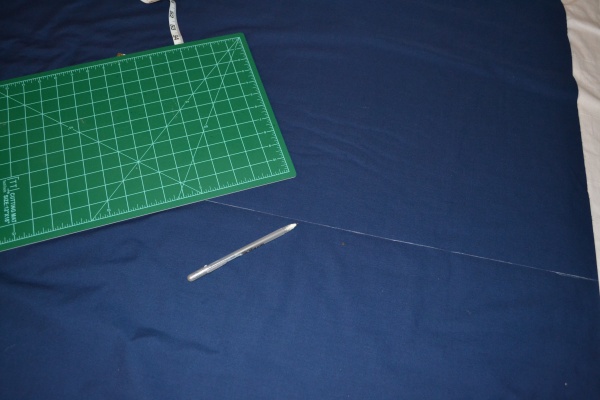 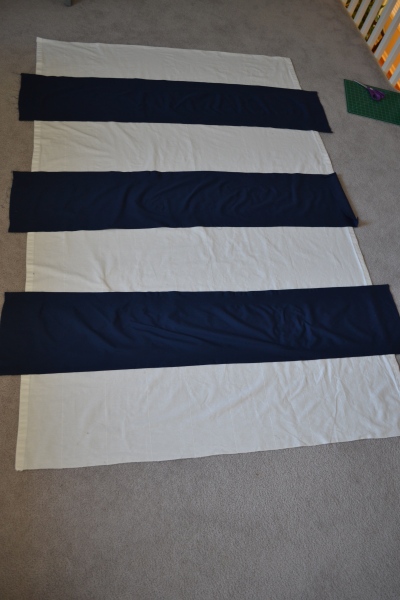 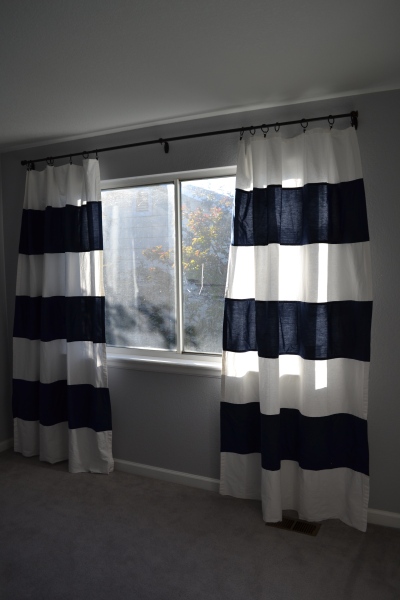 Back side of curtains

Not bad for $11, right? It was worth the effort – we both really like the way they turned out. We plan on getting some bamboo blinds, both pretty and functional, to keep the baby’s sleeping quarters nice and dark when we need it. We may even line the curtains with blackout fabric in addition to blinds just to make it extra dark.

As part of my nesting process, I’ve been in mad list-making mode. I’m already a list lover, but pregnancy has inspired me to put a special notebook in my nightstand just to contain all my lists. I couldn’t keep track of all there was to do if I didn’t have my handy dandy notebook. Plus there is nothing more satisfying than crossing an item off a to-do list, right?

Here’s a few of the biggies we’ve gotten done:

We still plenty of items yet to do, but the list is slowly shrinking:

Then I have many more ongoing lists. Like things to do post-partum, for example:

I’ve divided my trusty little notebook into different sections to categorize all the lists. It’s pure madness…and I love it.

We bought a crib back in December. It was our Christmas present to ourselves (and what we used some Christmas bonus money toward). I briefly mentioned it before, but after a lot of searching, we found just the style we were looking for on Walmart.com. Then it sat around in the box for about four months before we finally got around to assembling it. 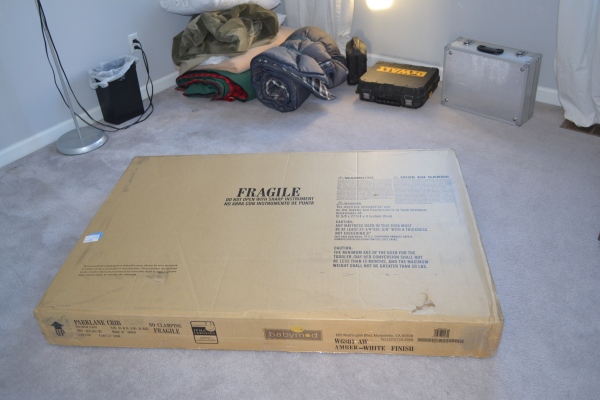 About a month away from our due date and the crib is still in the box. Yikes!

It took us just under an hour from start to finish, and that included opening the box and cleaning up the packaging afterward. Not too shabby. 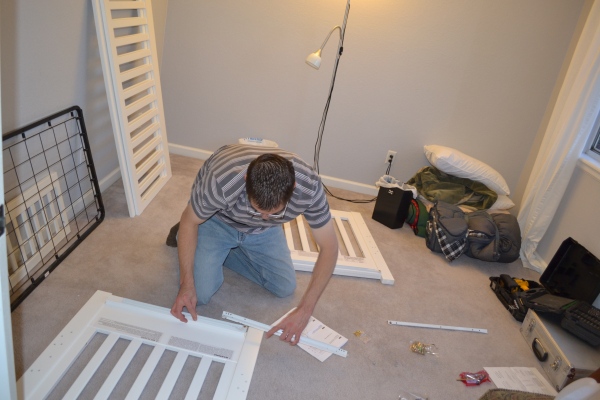 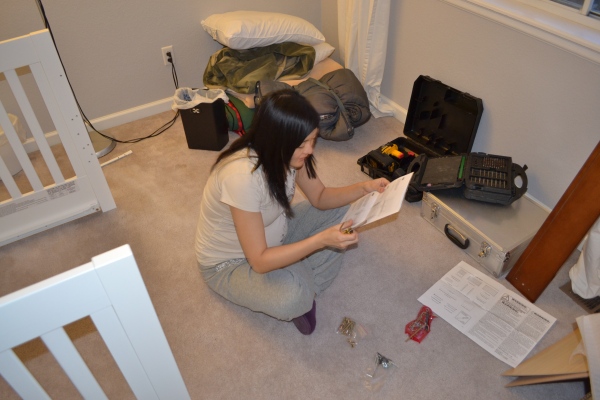 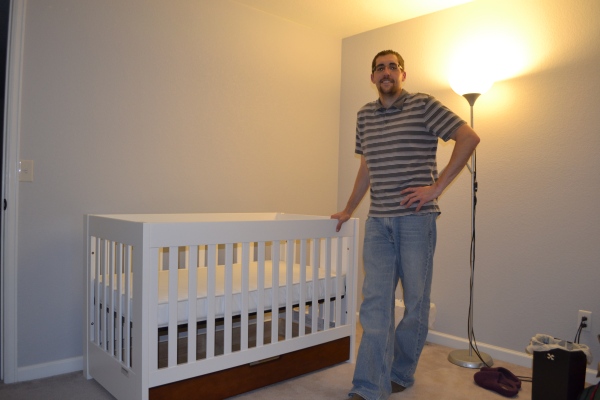 The only thing it was missing was a crib skirt to hide the space beneath the mattress and the drawer. Especially since we had no problem filling up the drawer with extra crib bedding and blankets – it started looking a bit messy under there. 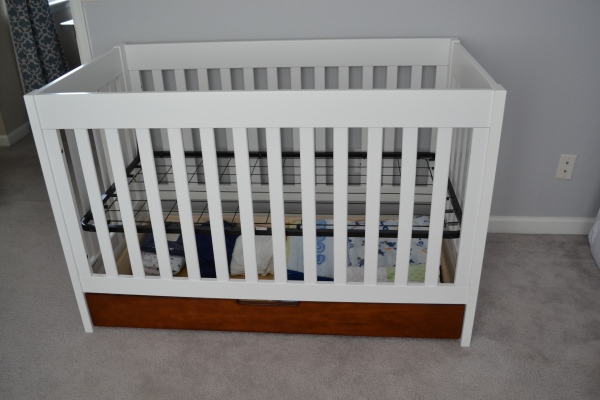 I wanted to go with a navy blue and white theme for the bedding. This was no easy task since most crib bedding comes in pastels or brighter colors. Also, I didn’t see any bedding sets I liked in a price range that was reasonable. So I decided to make the bedding myself, beginner sewing skills and all. I’d been scouring Joann’s and other stores for some decent fabric and had little success finding anything that I really liked for the nursery. Then a few weeks ago I found some awesome fabric at Walmart. I wasn’t even on the hunt for fabric, I just happened to be passing by while shopping for other things. It was just a simple navy blue with large white polka dots. Simple with a bit of whimsy without being cheesy. So I bought a yard and a half for about $8 and brought it home.

Since time is of the essence and I wasn’t really in the mood to sew, I cheated a bit and followed this awesome no-sew tutorial from my favorite blog, YoungHouseLove. Basically I just measured the opening between the base of the mattress and the top of the drawer, then measured the width of the opening as well. I then added about 2.5 inches to the length and width get the final dimensions of each skirt panel – three in total (one front and two sides). Then after washing and ironing the fabric, I measured and cut the panels and then used Heat N Bond Ultrahold to finish the edges. This is one of the best products ever for a quick and easy project! You just iron it on to the fabric (paper side up sticky side on the fabric), allow to cool, peel off the paper to reveal the adhesive, fold over the edge of the fabric and iron again to fuse it. After the three panels were finished, I did “hem” them together on the edges to create one continuous, long skirt panel. 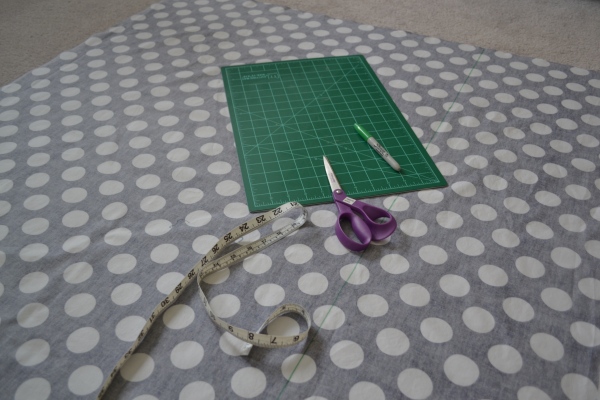 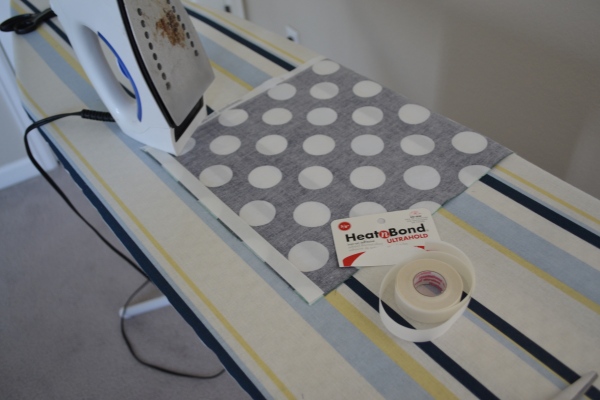 Panels cut and ready to have the edges “hemmed” with no-sew Heat N Bond. 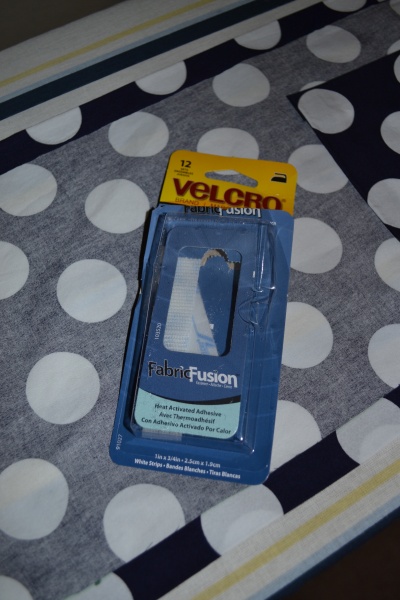 Fabric fusion velcro – simply iron on the high heat steam setting to make it fuse to the fabric. No sewing involved. 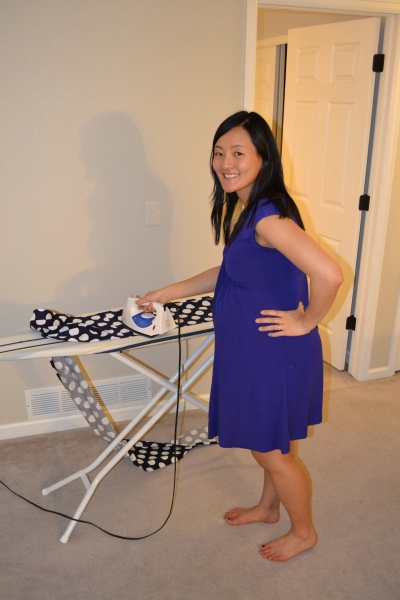 Ironing on the velcro. (Blake always finds the most flattering angles to photograph me…not!)

So that’s how I made my no-sew crib skirt. And here’s the final product with some before and after pics: 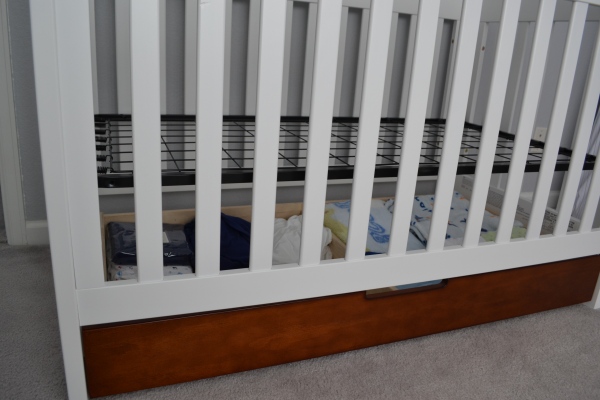 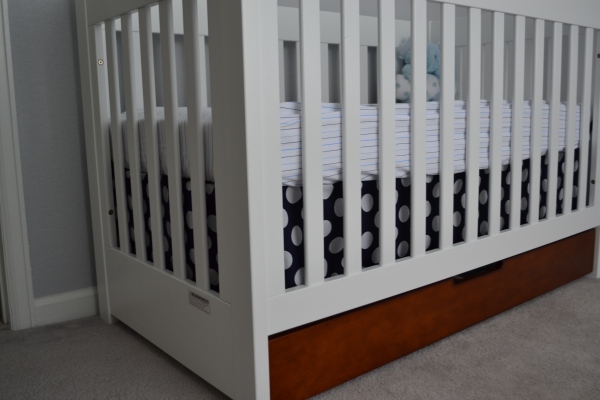 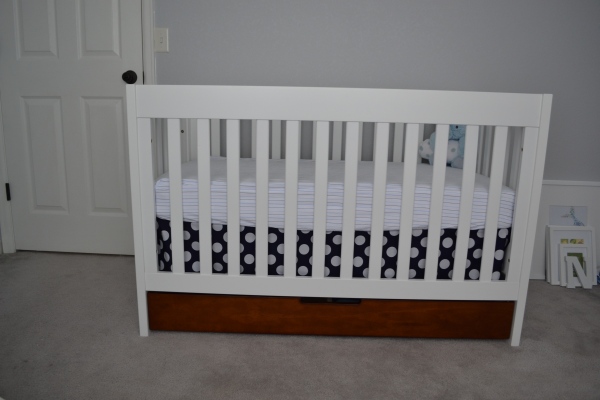 You might notice the frames on the floor to the right of the crib. That’s a project yet to come, but I plan on hanging up a little picture collage of some cute things I’ve made, printed, or collected. I also have a nursery mobile in progress for over the crib.

So that’s the story of the crib skirt. It feels good to have it done. Plus I love all the extra storage we get from the wood drawer beneath the crib. It’s nice to be able to truly conceal it. 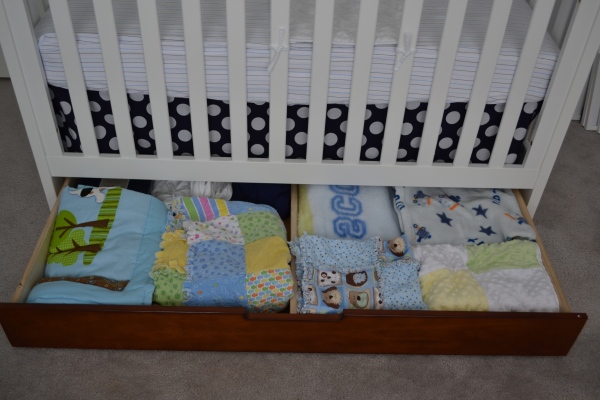 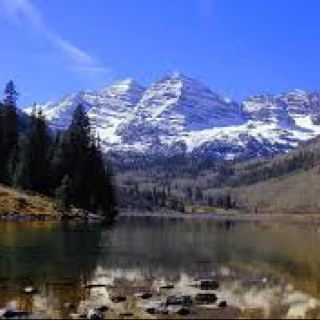